Providing Much More Than Meals 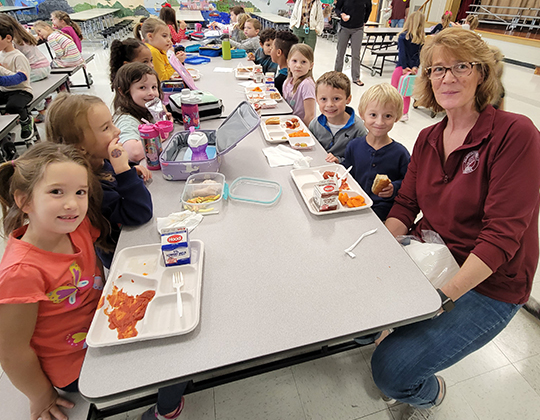 The Unsung Hero is designated by Superintendent of Schools Lori S. Duerr to shine a well-deserved spotlight on individuals in the Falmouth Public Schools who make invaluable contributions to the district.

North Falmouth Elementary School Kitchen Leader Sandy Licciardi doesn’t begin her shift until 7 a.m., but she prefers to arrive at 6:30.

“I like to come in a little early and get things rolling for the day,” she said.

After she and her colleague, Kristina Roderick, serve approximately sixty-five grab and go breakfasts, Sandy starts preparing lunch for the five waves of students from kindergarten to fourth grade that will make their way through the lunch line every half hour.

“Today we’re having meatball subs. The kids love them. It’s one of their favorites,” she said.

“I make my own sauce, so I usually cook about four gallons at a time and freeze half of it.”

She also makes her own BBQ sauce to accompany the baked chicken.

“It’s simple stuff, but hopefully, it makes it more enjoyable for the kids,” she said.

Her attention to detail is most evident in the connections she makes with the children in the bustling line, greeting them by name with a warm smile, and offering unobtrusive inquiries about their preferences, in an effort to make sure they’re indulging in healthy foods.

When a student passes on the selection of grapes, she asks if he likes peaches instead, and his face lights up.

“Let me go get you some,” she said, and disappeared only to return a moment later before the next child reached the register.

“My big thing is I don’t want any tears, so I try to do whatever I can to avoid that,” she explained with a smile.

While providing nutritional meals is Sandy’s top priority, she also wants the students to enjoy them. When a student politely and persistently inquired if fish sticks could be added to the menu, she brought the request to Ms. Burnes, and shortly after, his wish was granted.

A thank you note from the boy to “Mrs. Sandy” for “giving me fish sticks on Friday” now hangs in her office, next to another note, from a girl who commended Mrs. Sandy’s ability to adeptly manage “the struggle during lunch.”

“Sandy is extremely committed, and she takes great pride in her work, especially when it comes to feeding the children,” Ms. Burnes said.

“She goes above and beyond every day to make sure everyone’s happy.”

Kristina Roderick, who has worked with Sandy for the past three years, agreed.

“It’s obvious how much she loves her job. She’ll go out of her way for any child,” she said. “If there’s something that they really don’t like, she’ll make something especially for them. She’s extremely dedicated.”

“She really cares about the kids, and she puts a lot of effort into everything she does,” he said.

“She even brings in her own spices.”

Those efforts are appreciated by children like Julia LaRiviere, a student in Nicole Saltmarsh’s kindergarten class.

“The meatballs are so good. They’re just the right amount of sweet,” Julia said. “She makes everything taste like home.”

“In the short time I’ve been here, I’ve seen her go the extra mile, for both the students and the staff, to provide delicious, healthy lunches. She takes whatever is on the menu and puts her own creative spin on it,” Ms. Vieira said.

“She also creates such a fun and positive atmosphere with festive decorations, and the way she personally engages with each child in the lunch line.”

Currently, the decorative spider hanging in the corner is fashioned with a tiny Pilgrim hat to commemorate Thanksgiving, replacing the chef hat for Maison Villatte’s recent visit to the school. At the request of another student, Sandy added a Charlotte’s Web theme to the spider, along with references to the beloved book, such as the signature phrase, “Some Pig.”

Sandy and her husband, Lou are the parents of two children, Lucio Lucciardi, and Nicole O’Donnell, a teaching assistant at Morse Pond School. When Sandy’s not busy running the kitchen at North Falmouth, she’s running her own boat upholstery business.

Sandy began working for Falmouth Public Schools in 2011, originally at Falmouth High School, partly because she wanted to get out of the house. Now, she looks forward to work each day, and she doesn’t consider it a job.

“I just want to make the kids happy, that’s all. They’re here for such a short time as littles, so that time should be memorable,” she said.

“Sandy provides so much more than a healthy meal; she gives our students a sense of comfort and belonging,” she said.

“The positive impact that daily interactions with a kind and caring adult have on a child can't be overstated. We are extremely grateful for Sandy’s dedication.”

As the sign in the kitchen reads, “Food is love. We serve it every day.”